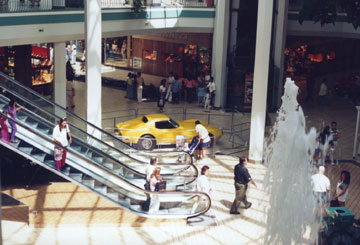 Participation and support of charitable organizations and special events is an import part of the car hobby. The Corvette Club of Ontario is a Patron of the Spina Bifida Association of Ontario, and has raised many thousands of dollars on their behalf through its activities.

We have participated in many such events both with the Corvette Club of Ontario, and as individuals as well. In 1996 we attended the 500 vehicle car show held as part of the “Corel Great Race”, sponsored by the Bloor-Yorkville Business Association. The event featured an across North America car race of vintage automobiles, that had its finish line in the Yorkville District of Toronto. Several blocks of the Downtown area were closed off for the event, and our Corvette was shown right at the corner of Bloor and Bay streets in Toronto. 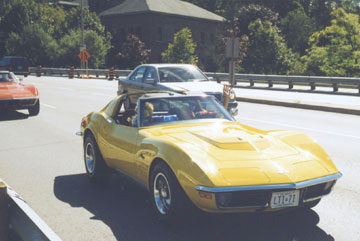 We have also participated in various Corvette Club of Ontario’s sponsor events as well. Here we are at the “Mardi Gras” parade for our sponsor SUNOCO’s 1997 United Way fund raising Campaign.

Specialty vehicle owners and Clubs have always been very generous and supportive of all sorts of worthy charities, and special events. We, and many of our fellow Corvette Club of Ontario members, participated annually for three years in the Toronto Star Wheels Fresh Air Fund Cruise-in held at the Toronto Woodbine Race Track. This event regularly drew 500 plus cars, and was a major fund raiser for the children’s charity.

In 1996 I participated with CCO in a car show on the un-opened Hwy 407 for the Canadian Cancer Society that saw over 250 cars participating. The Club has also participated in the Ride For Sight, as well as car shows in support of the Hospital for Sick Children. The 1997 “Shine 4 Kids” show helped raise over $40,000 for the hospital.