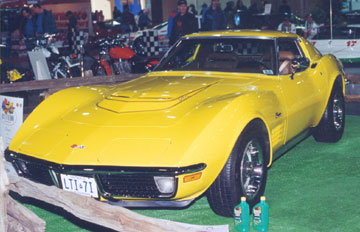 The Corvette Club of Ontario puts on a display every year at the two major Canadian indoor performance car shows and product expositions- Speedorama and Performance World. Speedorama is held at the end of January every year at the National Trade Centre in Exhibition Place in Toronto, and is part of the National Association of Show Cars North American event series. Performance World is held every year at the beginning of March, at the International Centre in Mississauga, Ontario. These large three day shows provide an excellent opportunity for us to promote the Club events for the upcoming season, to meet the public, to recruit new members, and to answer questions about Corvettes from the public as well.

When our Corvette underwent its body-on restoration at Concept Cars commencing in October of 1995, the goal was to have the car ready for display in the CCO booth at Performance World ’96 the following March. This large custom and performance car show can have over 500 cars on display, and gives away many thousands of dollars in prize money. CCO had four other cars in our display, as well as there being displays of several other Corvette clubs and individual Corvettes in attendance. 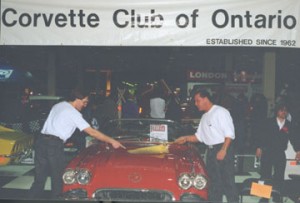 CCO always does very well in the individual awards, and the cars we were displayed with that year were no exception. Due to the extensive restoration and repair work we had to do to our Corvette, and the various “surprises” we found under the paint, we almost missed the show. We were still putting the pieces back on the car and Loran was still polishing the afternoon of the move-in. The car was finally ready at 6:00 p.m. 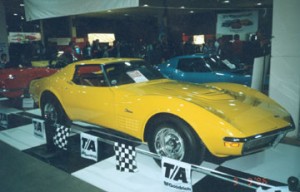 The Club volunteers setting up our display were rather anxious when the lift truck finally delivered the car to the show at 9 p.m. that night! However all the hard work paid off. We won “Best Corvette” sponsored by Beaky’s Corvette Parts and $100 for our efforts. Here the proud parents are posing with their trophy. We split the $100 prize with Loran Butler of Conceprt Cars, in appreciation of all the aggravation we caused him in meeting the show deadline. 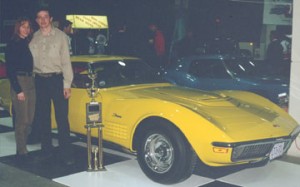 Speedorama ’97 was held at the Automotive Building of Exhibition Place in Toronto (the new National Trade Centre had not been completed yet). The Corvette Club of Ontario display featured a “Fruit of the Zoom” theme, and won a second place in the club display category. Naturally, our yellow Corvette was themed as the “banana” with the red ZR-1 in the middle the “apple”, and the purple haze 1973 the “grape”. 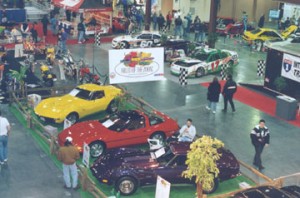 The display featured a fun collection of artificial trees and fruits, cedar fencing, and plastic turf.

We had sponsor support for the printing of the individual vehicle signs and the banner from Reprodux, and for the lift truck delivery by Abrams Towing Services. Our Corvette would eventually win the first place award in its class for “Late American Sport”. 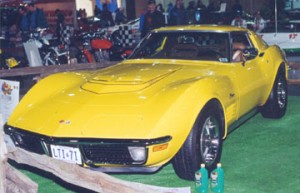 As Competition Director on the CCO executive for 1998 and 1999, Stu has the responsibility of organizing the displays for both Speedorama and Performance World. A lot of effort and logistics go into arranging and preparation of the members cars, assembling the display, manning it for three days, and tearing it down afterwards. With out the enthusiastic support from club volunteers, our presence at these events could not happen. 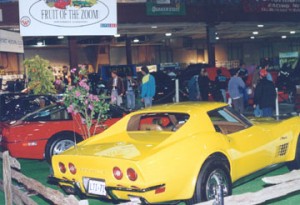