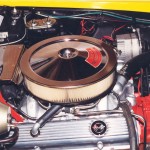 For 1971, as part of an effort to meet new incoming government emission requirements, compression ratio’s were lowered to 9:1, resulting in a reduced 330 gross horsepower. Also, 1971 was the first year that the LT-1 could run on un-leaded gasoline. In 1972 engine ratings were reported as an SAE net figure of 270 horsepower, but otherwise the car remained relatively unchanged.

In 1995 we contacted General Motors Canada at 1-800-263-3777 and by providing the VIN number, for a small fee their researchers were able to provide us with the original build specifications of our car. This service is apparently only available for cars that were originally sold in Canada.

Of note is the lack of comfort and convenience options so common on modern Corvettes. This car originally came equipped with manual steering and manual brakes (no power assist options). In January of 2000 a power brake kit was installed, including a new booster and master cylinder and stainless sleeve calipers. The rear window is removable, and stores on a drop down hinged fiberglass shelf under the rear deck. All LT-1’s were equipped with Muncie 4-speed manual M21 transmissions. Air conditioning was unavailable with the hi-revving LT-1 motor until 1972.

Details
The A.I.R. system is missing, as well as the original K66 transistor ignition. We have replaced the ignition system with a Mallory Unilite, Crane HI6 box, MSD Blaster II high voltage coil, 8mm silicone plug wires, Split Fire plugs and an Accel cap and rotor. This extra sparking power really helps prevent flooding when starting, provides better fuel mileage, and some horsepower however, the cap and rotor need to be replaced every season. 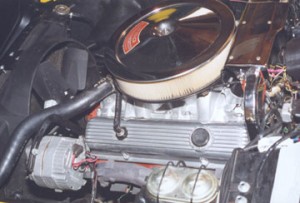 Driving Impressions
At speed, the car handles surprisingly precisely, and with little steering effort, (though parking with manual steering can be a bit of a chore). The controls feel very sensitive, with light, very quick ratio steering. The throttle response is unbelievable, from the hole right up to the 6500 rpm red line. It’s easy to see how they got 0-60 times in the low five seconds out of the LT-1’s when they were first reviewed in 1970.

The Corvette was designed to be a front-mid engined sports car, and when equipped with a small block motor, front to rear weight distribution was near even. With the addition of the aftermarket rear sway bar (standard on the big blocks that year) our LT-1 corners like it was on rails. 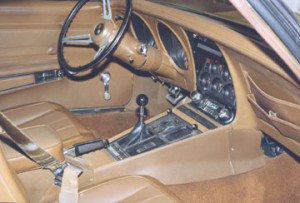